Riding in a goat cart was one of the first things I wanted to do when we got our first goats. That is after I realized there was such a thing. Our first born, Lester, was the perfect selection. He’s a boer/nubian cross and weights over 200 pounds.Big, strong and just a bit stubborn. Working him would be perfect!

I’m sort of a ‘hefty lady’ and I didn’t want people feeling sorry for the goat pulling me. So I HAD to have a BIG goat. Lester fit the bill.

I’ve talked about being in parades so often that I actually convinced myself that I could do it. However, when the opportunity presented itself, I changed my mind.  Here’s why:

The week before the parade, Lester started going backwards! The only way to stop him was to get off the cart. That wouldn’t be to cool on the parade path.

He’d often gotten down on his knees but we had that worked out. Then he started laying down. What do you do with a 200 pound goat who’s laying down? Well, you get off or weight him out. Neither of which would be fun during a parade. 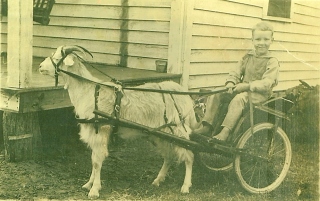 My uncle Travis was a childhood hero of mine. He could do anything, and often did. Full of life, he made me laugh, taught me how to play golf, and took me riding on his scooter. If he mention that he’d had a goat card, I don’t remember it but when my aunt sent me this picture, I knew he would approve of goat carting.


Having goats in my childhood wasn’t a consideration — never entered my mind. I had been raised in Dallas so I was a city girl. My connection with the farm took place during summer vacation from school. I’d spend at least two weeks with my grandparents on the farm.

But the Goat Gods had plans for me. Over time, I’ll share my tales with you. Check back ever once and a while to see what’s happened.