Sleeping Dog Ranch Nubians has several handsome guys growing into their upcoming jobs. Ah, that would be breeding with the ladies. Interesting how so many fellows were born for this work. However, our breeding program is highly competitive and only a select few will be chosen. 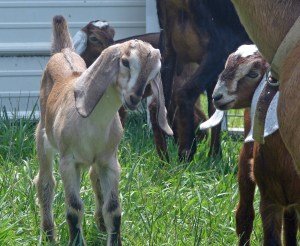 These two little guys are in the running and they have no idea how lucky they are. Boys are selected based on their mama’s udder, their confirmation, coloring, and disposition.

The cream colored guy, Swift, is my main selection from the 2009 babies. That is, if he continues developing well.

, is another strong contender.

Swift is a little skittish and hard to catch so we’re all holding him as often as possible. I don’t chase goats so if he wants to be a breeder, he’ll have to settle down. Wilson, on the other hand, is easy to catch, is a good smoocher, and a true lover.

Our main man, Bucky, is getting older and will be retiring soon. He’s earned his retirement. Ah … that is IF he will retire. We’ll see.

But these little guys must make it through the winter. We lost two promising bucks last January. Even though we’ll be applying every lesson learned to keep the guys alive and developmentally on track; in the end, they have to be strong enough to make it — on their own.

Their ability to survive is part of the selection process. Tuffffff, I know, but a requirement. As a breeder, I want these little guys to survive and be strong but I can only do so much. It’s that strength that we’re building into our herd.

Also, we have three more boys in the running but right now they’re just a little too young to know for sure. We’ll be watching them, too.

I’ll be happy to let you know how these guys develop over the next several months.

One thought on “New Boys are in Town”