Father’s Day may have come and gone this year but we continually honor our big guy. He receives the treatment of Kings so he can keep taking care of his ‘ladies’. 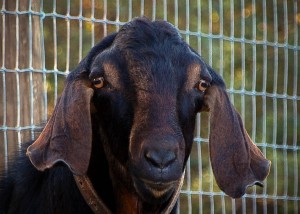 Our neighbors knew I had been talking about getting a buck so they called when he arrived. I went to, as I told my husband, ‘just look at him’. Thank goodness I had my checkbook. (Imagine that.)

Love at first sight does exist. My eyes saw him and my heart became mush. I know a good looking guy when I see him. For a two-year-old, he was outstanding. My heart was still beating fast when the words came out of my mouth, “I’ll take him. How much do you want for him?” Not the usual order of smart questions, but it worked out.

Knowing that we didn’t have the facilities to house him, our neighbors agreed to ‘room and board’ him until we could properly care for him.

On the way home, I thought about how I’d tell Bob what I had done. Thinking of that, what HAD I just done? The reality of not having goat housing stung — hard.
Geezzzzze, I’ve done it again. Husband Bob has (and still is) asking that we do the construction projects first then get the animals. Oh my, maybe he’ll be understanding just one more time.
Six months later Bucky moved into his new home and met his mates for the first time. This photo was taken on his first day here. I know now that two-year-olds are not fully developed but I got lucky. He’s grown into one super hunk. His disposition is gentle. Apparently he had been a lap-goat in his youth. It showed in his gentleness.
Here he’s full-grown and living with Penny, a super lady. 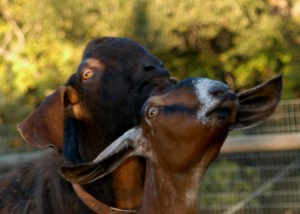 What a handsome couple.

He went from living with three ladies to living with eleven. It took it’s tole, he lost so much weight and hair, we thought we were going to lose him.
That poor boy was exhausted! The women did their part; so did he.
Just look at his beautiful babies.

Bucky has been with the other guys for several months now. He’s rested, eaten, rested and groomed. His hair has grown back and so has his weight.
He’ll be ready for more ladies in October. But for now, he’s eating well and gaining weight. Bob and I spend as much time with him as possible.

He was gentle when we got him, it’s up to us to keep him that way.
We honor you Bucky. Thank you for the beautiful babies.